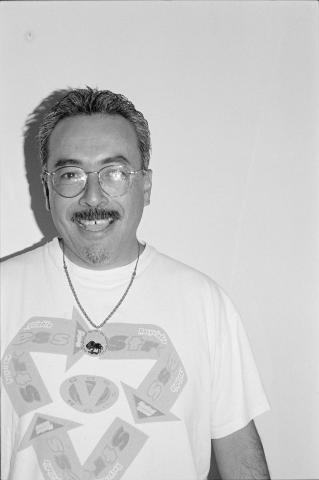 Juan Felipe Herrera performs his poetry and speaks movingly about song, language, and family in a reading given alongside Sherwin Bitsui for the 2009 Tucson Festival of Books. Herrera's Half of the World in Light: New and Selected Poems, published by the University of Arizona Press, was announced as the winner of the 2008 National Book Critics Circle Award just two days prior to this reading.

Juan Felipe Herrera warmly engages the audience with work that would be collected in books such as Mayan Drifter: Chicano Poet in the Lowlands of America (1997), Notebooks of a Chile Verde Smuggler (2002), and Half of the World in Light: New and Selected Poems (2008), as well as uncollected pieces. Standout performances include "Notes on Other Chicana and Chicano Inventions" and "Suicide in Hollywood / Lupe Velez (Circ. 1923) Serigrafía de una actriz Mexicana," read in Spanish and English. Opening his reading with an invocation to sky, earth, wind, and fire, Herrera encourages audience laughter and participation throughout the evening.